How to Stay Safe Behind Snow Plows 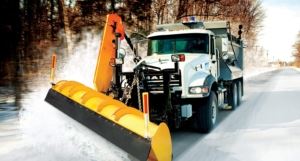 Snow plows have been a dime-a-dozen this winter but sometimes we take them for granted. Snowplows make roads safer for everyone. Cars, SUVs, school buses, trucks, and pedestrians are all better off once they’ve come through, even if they are equipped with four-wheel drive or tire chains. The plows make the roads passable and reduce the risk of getting stuck in the snow.

How Dangerous Are Snow Plows?

However, drivers need to keep safety at the front of their minds when sharing the road with snowplows. Snowplows weigh four times more than the average car, and a collision with one can be deadly. Unfortunately, collisions between snowplows and other vehicles are common. Although most reports don’t differentiate snowplow accidents from other kinds of accidents, some states do estimate them.

The Iowa Department of Transportation, for example, says an average of 46 accidents each winter involve a snowplow. The department has paid more than $1.2 million to repair other vehicles and settle claims for injuries caused by these accidents.

Drivers need to keep a few facts about snowplows in mind to be safe. First, snowplow drivers are driving in conditions that limit their visibility. This is certainly true if it’s snowing. However, even when stopped, weather conditions could still make it difficult to see.

Snowplow drivers are doing a dangerous but incredibly important job. They work 12-hour shifts in hair-raising conditions. They may be distracted, cold, tired, or all of the above. It’s possible that they’ll turn onto intersections directly in front of drivers.

One such accident in Iowa occurred when a snowplow turned left, crossing traffic. A driver in a van did not have time to stop and slid into the plow, totaling the van but thankfully resulting in no injuries. Drivers must drive defensively around snowplows. Be cautious whenever you see them, give them a lot of room, and follow the three tips below.

Passing a snowplow is a pretty bad idea, all things considered. They may be driving very slowly, but you are always better off following a snowplow than driving in front of one because the road in front of them hasn’t been plowed yet!

Even if you have four-wheel drive, just let the snowplow do its job before you try to pass it. Some snowplows come equipped with specialized front and side plows. These side plows, called wing plows, jut out 10 to 12 feet on the side. If you pass them, you run the risk of not clearing the plows, especially if visibility is limited.

Snowplows need to go about 35 miles per hour to do a proper job. The slow speed may make you impatient, but you need to drive a safe distance behind them. Many states have adopted the slogan: Don’t Crowd the Plow. Make that slogan yours to keep you and your passengers safe around these 30-ton vehicles.

Snowplows may need to stop or swerve abruptly to avoid obstacles, including stranded cars. They aren’t driving erratically, necessarily. Drivers are up against unpredictable conditions, and if you’re driving behind them, you will be as well. You need a safe following distance in case they need to stop suddenly or back up.

You don’t necessarily need to be driving to get into a dangerous situation with a snowplow.

Last January, a huge blizzard dumped three feet of snow on parts of the Eastern U.S. As people began digging their cars out of the snow, there were a few tragic stories of people who got inside their cars to warm up and never got back out of them alive.

If your car is parked on the street, and you pause while clearing it off to get inside to warm up, passing snowplows could plow you back in. Except now, your car is running, and your tailpipe could potentially be blocked by snow. In this situation, instead of being able to exhaust to the outside, the carbon monoxide backs up into the car.

It can take a matter of minutes for the carbon monoxide to reach lethal levels, at which point you would pass out from the lack of oxygen. Avoid this situation by clearing away all the snow around your tailpipe before you ever start your car.

If there is a lot of snow on the road, avoid situations where you might be sitting in a running car when a snowplow goes by. And if you do get plowed in, stay calm and immediately turn off the engine. You may need to exit your vehicle from another door if the driver’s side door is stuck or call for help if you are trapped.

Stay safe this winter. The snowplows are out on the roads to help you. Stay safe and help them do their job by following the three simple tips we went over today.

Have a personal injury claim in Fargo, Bismarck, or Detroit Lake? Maring Williams Law Office is here to help. Call (701) 402-6644.or contact us online today!